MySurvey is one of the oldest and most reliable survey companies out there. They used to collect opinions using regular snail mail, then the telephone, and starting in 2001 they began offering surveys via their website. MySurvey is a good paying survey panel and usually sends at least 2-3 survey invites per week. It should be part of everyone's collection of paid survey panels. Cash outs are easy and only require you to build up $10 worth of points. Also, most of the surveys are quite short, so you don't get burnt out on taking long surveys. 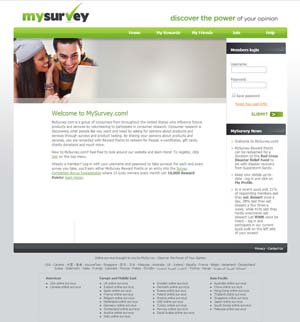 1
MySurvey.com is generally one of the more “fun” survey panels to join
2
They offer interesting surveys, and offer different types of contests for their members
3
You are rewarded with extra sweepstakes entries just for logging into the member’s area
4
Get started by completing the quick 5 minute registration process
5
Complete short surveys for 10 points (~5 minutes each)
6
After that, you can earn as much as 1000 points per survey
GET SURVEYS BY EMAIL!
Get the best survey opportunities sent right to your email.